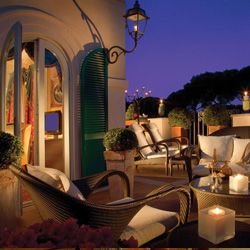 The Hotel Splendide Royal in Rome is a luxury five star hotel, designed to be royal, luxurious and the same stature of the most accredited hotels in Europe. After more than one year of skilled re-structuring, this 19th century palace once headquarters of the Roman Maronite community is now a luxury hotel and, in its own way, a symbol of the changes taking place within the Capital City's fine tradition of hospitality. Recently baptized Splendide by guests themselves, the hotel is "toutcourt", full of that warmth and familiarity found usually only among friends.

Land price is per person based on double occupancy for select travel dates noted.

Rome wasn’t built in a day…but you can tour it in just over 10 hours. A teeming anthill of humanity and antiquity intermingled with awful traffic jams, Rome grew up on the Tiber (“Fiume Tevere”) among seven low hills that rise from the river’s soggy eastern banks. It’s a city of many peeling layers of history, of which the bottom layer–that of the earliest Roman centuries–is the most interesting and still astonishingly whole. The hub of this layer is the Palatine Hill, the Forum, the Colosseum and the Circus Maximus.

On the western bank is the Citta Vaticana, the independent papal city where the Pope blesses pilgrims from all over the world. Neighboring Trastevere (“Across the Tiber”) is a mix of Roman, Greek and Jewish subcultures, great for little restaurants and nightlife. Further north on the other bank is “vecchia Roma,” medieval Rome of the Pantheon and Piazza Navona; Renaissance Rome is centered south of the Corso Vittorio Emanuele. Commercial Rome is the city of the Via del Corso, the Piazza del Popolo, the controversial Victor Emmanuel monument and finally the Stazione Termini, the nexus for all trains and roads from Rome.

Land price is per person based on double occupancy for select travel dates noted. Rates quoted include government-imposed fees and taxes. At the time you purchase your package, rates may be higher. Advertised prices do not include any applicable daily resort, facility fees or city tax fees in Europe payable directly to the hotel at check-out; such fee amounts will be advised at the time of booking. Subject to availability and change; certain restrictions and blackout dates may apply. Not responsible for errors or omissions. [Journese acts only as an agent for the various travel providers shown above.] CST 1007939-10. UBI 601 915 263. TAR 5308. Copyright ©2018 Hawaii World, LLC (dba Journese). All Rights Reserved. .